Back in early 2010, shortly after launching this blog, I put pen to paper on some of the core ideas guiding my views on the future of news. Here’s one of them that I still believe is crucial and often ignored:

1) When I talk about how we will finance news/journalism I’m interested in only a very small subset of all journalism which I’d refer to as that which provides core civic knowledge.  In other words, the information that we feel is vital to a functioning democracy.*  By this measure, most of what we see in the newspapers is not an issue.  Go through a newspaper sometime and look.  We’re not talking about how to fund the sports section, the travel section, the style section, that article on some writer’s quest for the perfect espresso.  That is beyond the scope of what we, as a society, need to ensure exists going forward.

Today, for the fun of it – yes, this is what I do for fun on a Sunday – I browsed the NYT homepage starting at the top and counted 25 headlines to see how many seemed to fit (based on headline alone, for time’s sake) my definition of civic journalism. I ended up with 12 out of 24, with one not classifiable based on headline (it was a Dowd column so we can be fairly sure it could go.)

That 12 included one story not civic  per se, but a breaking news story about an earthquake that seemed worth counting based on the idea of essential national news. You can count the top stories yourself and see what you come up with, though my screenshot below doesn’t capture all 25. 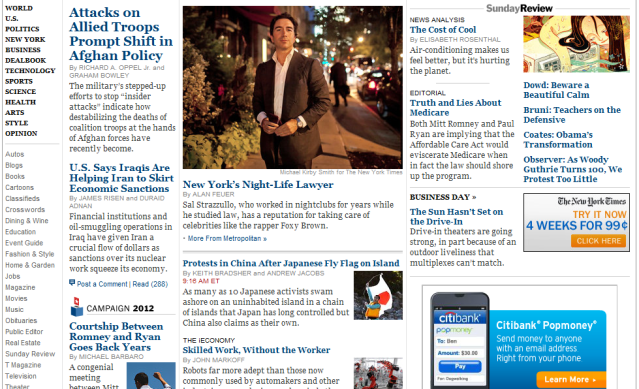 My point here is that most journalism isn’t worth saving, from a democratic perspective. Now, we might want to save it for other reasons. I’m a writer, so I’d like to have a job. I work for a startup that’s betting on the reinvention of media as a business. But whether writers have jobs and investors can get a decent return off of a content business are separate from the question of protecting capital J Journalism.

As for how to preserve that core civic journalism, I don’t have the perfect answer. (I lean toward a nonprofit model like ProPublica, and am additionally hopeful that universities will shoulder a lot of the burden.) But a lot of the discussions about how to save journalism – and about what new media experiments are worthwhile and not – become much clearer once you realize you’re really only trying to preserve a subset of existing media.

One thing that bugs me, perhaps because I work for a new media business, is that new entrants are often judged for the quality of their content without much attention to that of the incumbents. Business Insider gets panned for its slideshows or HuffPo for its celebrity gossip without any mention of the fact that the majority of traditional journalism served no civic purpose, but just existed as entertaining content.

That roughly 50% of the top stories in America’s top newspaper makes this clear. Now, I love the NYT and I’d rather read their non-essential stuff more than the non-essential stuff at various other outlets. But wanting to read a J-school grad reporting on New York’s nightlife lawyer isn’t in and of itself better than reading a Gawker writer mocking this that or the other.

The next time you have a conversation about saving journalism, or about the quality of a new media entrant, remember: the segment of media worth saving for the sake of democracy is only a very small slice of what has traditionally gone under the banner of journalism.